Ignacio Evangelista has portrayed the reality of the border between the United States and Mexico. A conversation about Trump, fear, and the line in the sand. 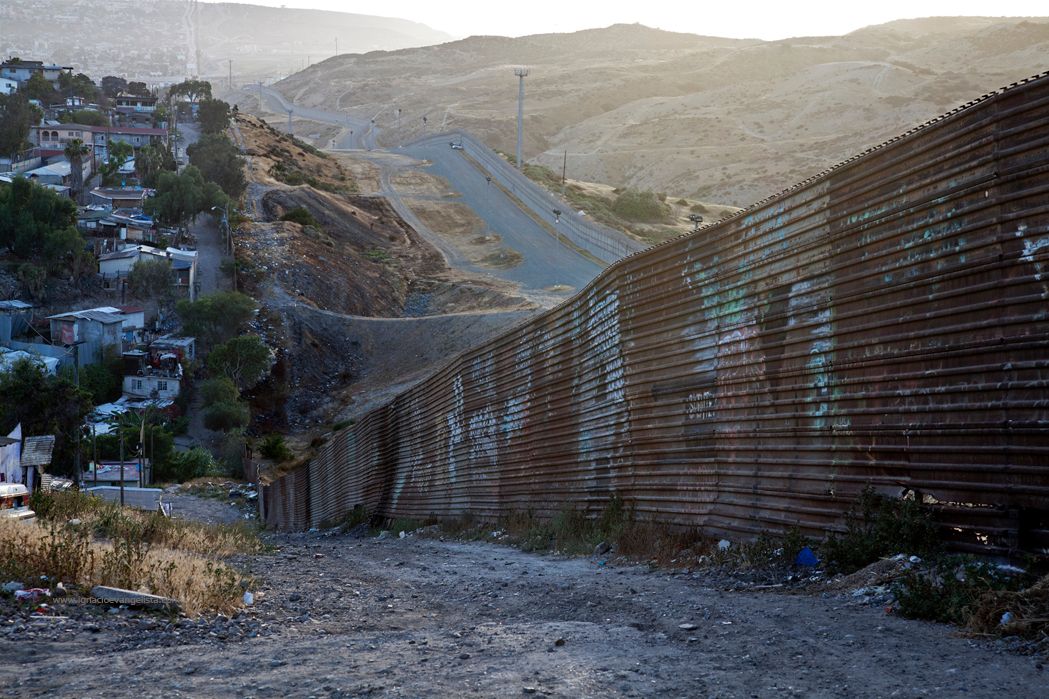 You have photographed borders in Europe, as well as the one between the United States and Mexico. What makes you so interested in them? In my photographic work, I am interested in situations and places where the natural and the artificial stand in conflict. Situations where something seems out of place. Some borders are natural, like mountains or borders. But others stand for an idea.

What does that mean? Look at the border between the U.S. and Mexico: A part of that is natural — the Rio Grande, known as the Rio Bravo in Mexico — and the rest is artificial: There is a fence, a wall in the middle of nature, just separating two countries. I got fascinated with that a few years ago, when I discovered it online: It seemed like a modern Great Wall of China, crossing the territory. The wall is 1000km long. Built by people, just to prevent others from crossing a line in the sand. It seemed crazy, like something you wouldn’t find in the 21st century. 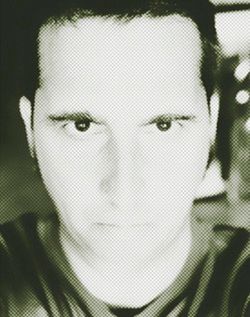 On your website you wrote: “Touching the fence felt like touching the line on the map.” When I was a child, I was very fascinated with maps. I remember looking at the map and feeling like a god: With a child’s imagination, you can travel across it. For me, it was very interesting that some of the lines were very straight, and others weren’t. I thought “African people are much smarter than Europeans to plan their borders that way.” Of course, I had no idea about Colonialism yet. I still remember that sensation today when I look at the map between the US and Mexico, as I am doing right now. You can see that there’s a straight line in the west…

…from Tijuana, all the way to El Paso. Exactly. And then the river begins. The line from Tijuana to El Paso is the wall. Effectively, the wall is the line — and when you touch the one, you touch the other. When I was visiting borders in Europe, I would sometimes play a game, just from one side to the other and think “Now I am in Austria. Now in the Czech Republic.” A part of taking pictures is the feeling you have. I did the same with the fence: I would touch it and think: “Now I am touching the line on the map.”

“If you put your feet on the sand, an alarm goes off somewhere”

What side did you take these photos from? It depends: It can be difficult to approach the border. In Mexico, the most interesting motifs are often in the outskirts of the cities, poorer parts. Those are often dangerous, so I went there with locals. But on the American side, there is the  border patrol, with its cars and helicopters. I would be asked what I was doing, what the pictures were for, etc. That’s why I have fewer pictures from the American side. 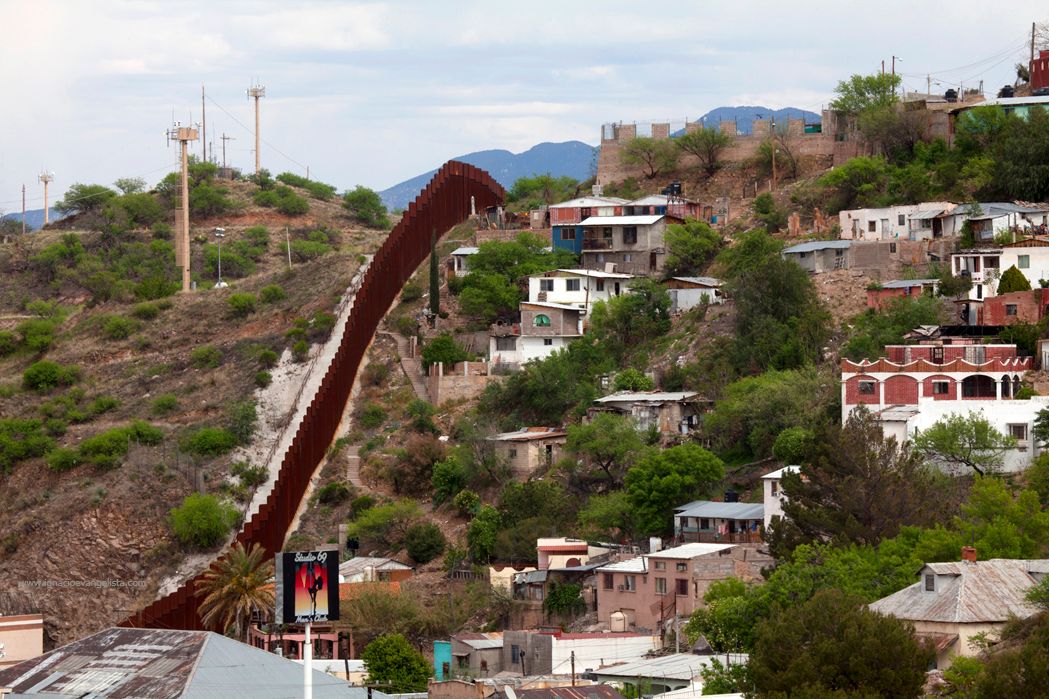 On your picture from Nogales, the Mexican side is full of houses, people are clearly living there. On the U.S. side, however, there are just towers and lights. In a picture from Tijuana, you can see a white car, the border patrol. There is a secure area on the American side with very open roads. I took another picture in the ocean in Tijuana, and wondered why people risk their life climbing the fence in the desert when they can just swim around this one. But my friends explained that there were always helicopters in the sky and the sand was full of sensors to detect movement and temperature. If you put your feet on the sand, an alarm goes off somewhere and within 30 seconds, the border patrol will be there. 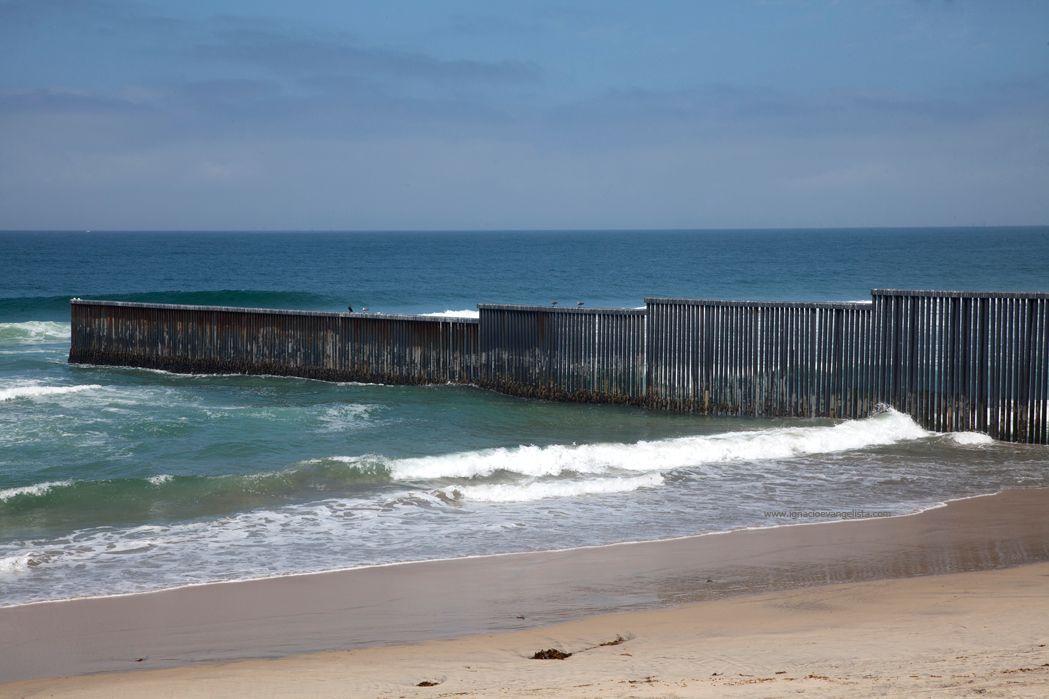 That means the border isn’t just a wall: The line on the map has a virtual component. I am not sure how this was twenty years ago, but I know that George W. Bush increased the investment in modern alarm systems. You know, if Donald Trump becomes president, he wants to finish the wall…

It was Trump’s first policy proposal: To complete build a wall on the border with Mexico. But he made it sound as if no wall existed… I suppose he means completing the 2000km from El Paso to the east, but since he wants the Mexican government to pay for it, I don’t know how it would happen. Interestingly, many people living close to the wall no longer see it. For them, it is just so familiar. Like if you live in the alps and no longer notice the mountains. That’s why it surprised many people that I was taking pictures of the wall instead of the beautiful landscape or the beach: They have lived with the wall for so long, they are used to it.

The difference between you and them is that you have a Spanish passport and can cross the border without a problem. Some people living close to the border have a special permit to pass, but only twenty kilometers into the United States. As a European, I had no problem, but the people I went with often couldn’t pass. It made it very obvious that we were coming from different worlds.

…which brings us back to the artificial nature of borders: You able to cross the wall in their backyards because you are coming from far away. That is absurd. True. I speak the same language as the Mexicans. There is the assumption that Latin Americans and Spaniards are very similar, due to the language and history. But it’s not exactly true. In many senses, the Spanish society is more similar to French or German ones than the Mexican one. The values shared between a Spanish and a French are sometimes closer than those of a Spanish and a Mexican, although in some other aspects we are very close.

The language eradicates that border? Many call Spain “la madre patria”, which gives us a strange feeling, considering how the Spanish killed and raped a lot of natives there, they were the worst people there. 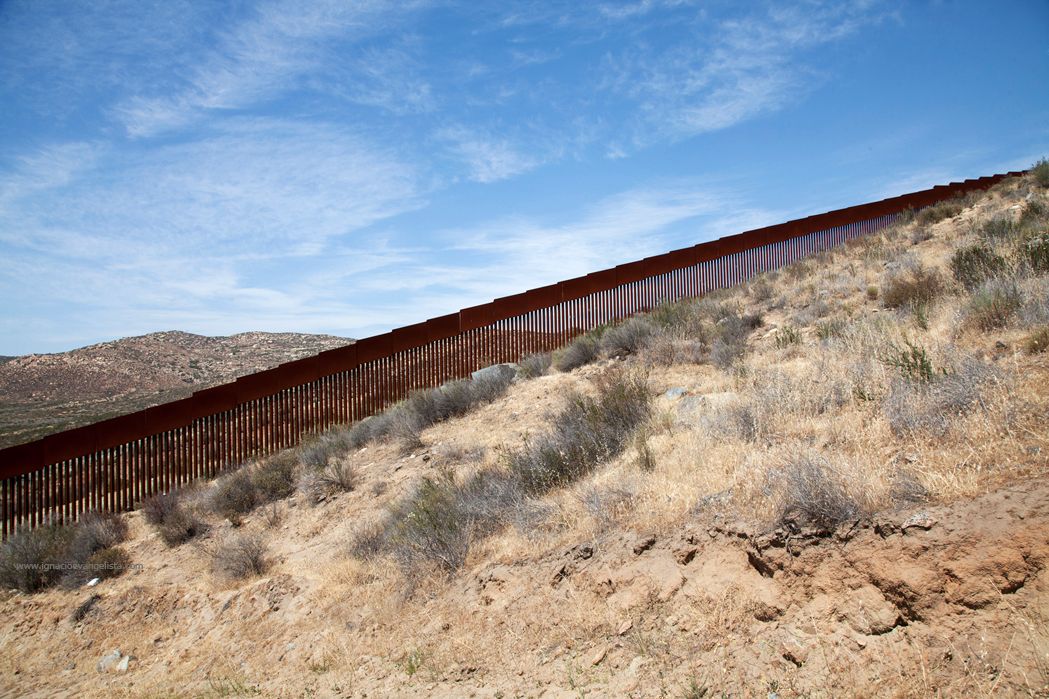 There is an interesting relationship between borders and fear: These divisions are artificial lines, but right now, in Europe as well as the US, many people are afraid of anything beyond those lines. Ironically, a wall creates that kind of fear. It makes everything beyond it seem dangerous. And it endangers people who want to cross it: They use the mafia, people who lead them through the desert and frequently leave them there after taking their money. Each year, many people die crossing the border.

You don’t show any people in the pictures — even though the walls influence primarily them. I didn’t want this to be photojournalistic work, and introducing people into the image would make it that. I was more interested in how the border relates to the territory, how the artificialness of the world mixes with it.

On your website, you say that the images seem contradictory and disturbing. What makes them that? Look at Nogales: It is a city in two parts, Nogales, Sonora and Nogales, Arizona. And the Mexican city Tijuana borders the American San Diego. Both are as as though somebody had taken a pencil, drawn a line and built a wall. That is a very strange thing! In the desert, you see a beautiful, mountainous landscape, and in the middle of the nature suddenly appears a wall. I find that disturbing. In much of my personal work, I am interested in situations and places that makes you think “What the fuck is that doing here?” 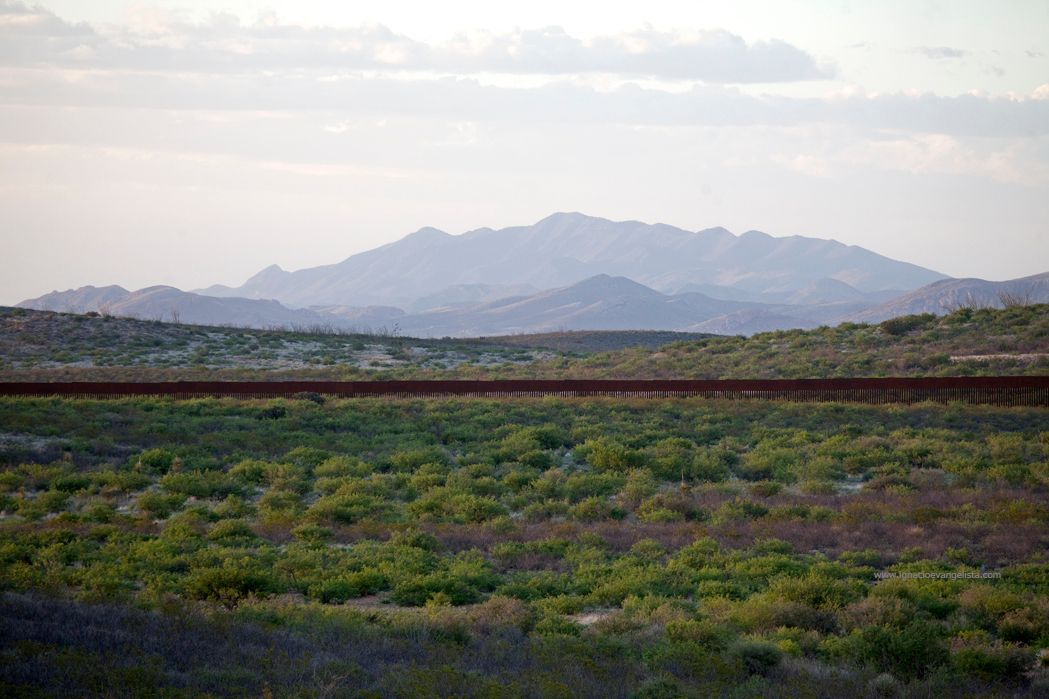 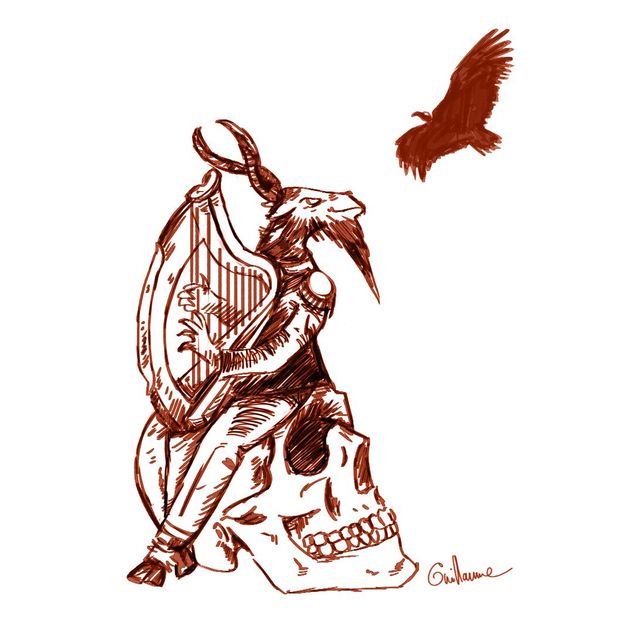 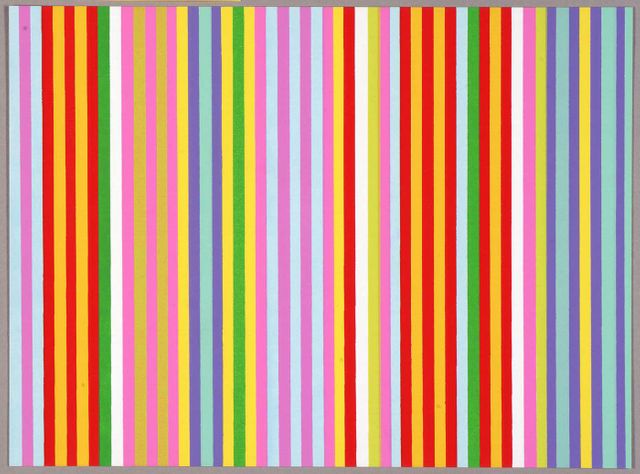 borders
Latest posts Telephone Angel Kenneth Goldsmith on the end of the Internet Street View’s Strange Solitude Shame "Of course I want to turn away from sin" Myth Trash “Nature is probably best for solitude” "Isolation isn''t the biggest problem" Margin Walker Party of One Alone among each other "We are surrounded by the lonely all the time" Solitude Walled Garden "A line can turn into a horrifyingly rigid reality." "Mainstream porn is quite insane" The Crossing borders “What the fuck is that doing here?” Loud as Hell A Friend of the Devil “People say: ‘Father, I need an exorcism.’” “We are rational people” The Devil You Know Inertia Hitler! War! Destruction! The Devil “We don’t have any positive pictures of adulthood” Young at Heart 'The Animal Cracker Plot'