“Of course I want to turn away from sin”

Ezra Furman is a gender-fluid rock musician and practicing Jew. To him, that’s not a paradox but an empowering identity. 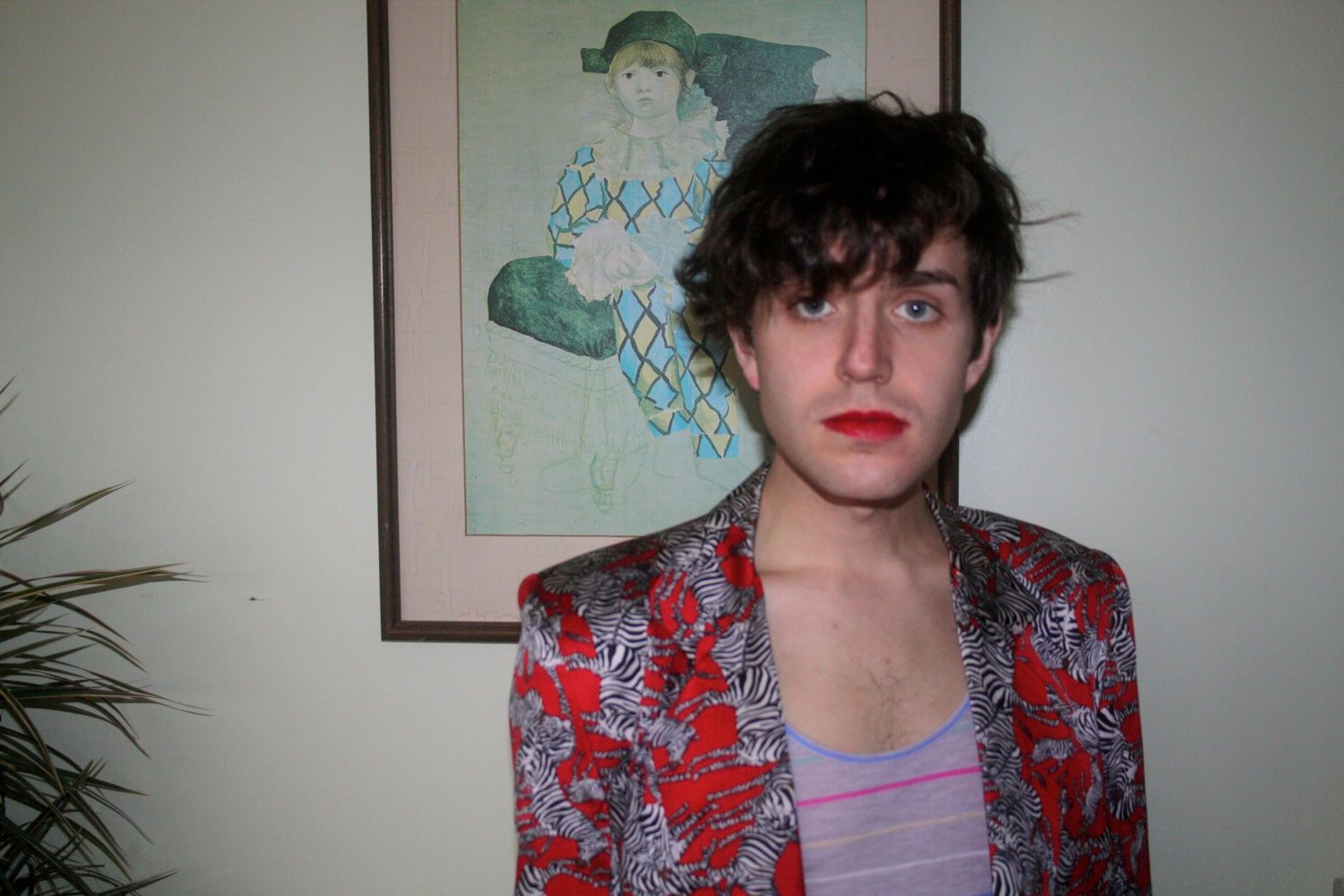 Religion seems to be very central to who you are as an artist and private person. A lot of your lyrics deal with God and you describe yourself as a religious Jew. That is not the first thing that comes to mind when I think about a self-proclaimed gender-fluid rock musician. I don’t see any contradictions there. Music and religion have always gone hand in hand. Gospel and other church music are the most obvious examples but also Blues was hugely influenced by the musicians’ faith or interest in god. Music has the power to bring people into a state of transcendence in which they experience extreme joy or sorrow. Music gets you to think and act beyond your regular and mundane state of being. Religion has that power too. To me, these are just the two things that I care most about. My purpose in life is connected to both of these things. I think God wants me to use music to improve people’s lives.

Other rock musicians like Little Richard became extremely religious to turn away from what they considered a sinful life. With you, it seems that you embrace both religion and the sins that come with the life of a rock musician. I wouldn’t put the two in such opposition. It’s not like every rock musician leads a sinful life or that you can’t sin and yet be interested in religion. Especially in blues and early rock, the devil was a very important and widespread symbol of the temptations of everyday life. But I come from a Jewish background and the devil is not that central in Jewish mythology. In Jewish tradition, there is no personified master of evil. We believe that there is only the evil inclination in each and every one of us, and that is something I concern myself a lot with. Of course I want to turn away from sin. That was the impetus for my song One day I will sin no more. But when I think about sinning, it is mostly not related directly to my profession. There is a culture of heavy drinking and casual sex in rock and although that is not necessarily sinful, I am morally weary of these things. It is tough to be a religious Jew and a rock musician, but mostly so because of clashing schedules.

You never played shows on Fridays to observe Shabbat. That is one example. It’s hard to follow the rituals if you are constantly on the move. That is the biggest problem.

But the mythology and rituals of rock music seem so at odds with how religion wants us to behave. I don’t necessarily agree. I know what you mean but consider that rock is about disobedience and so is a lot in religion. Yes, religion often wants us to live in a certain way and to obey rules but my belief is that there is only one judge of humankind and so nobody apart from god has any authority over me. The more religion becomes a strange thing rather than the mainstream of society, the more it becomes a revolt against that same mainstream. There are many variations of religion and therefore many ways to practice it. I don’t come from a conservative background; there was never any pressure to live in a certain way.

”Religion is empowering the underdog”

Would it be correct to argue, that you are more interested in god than in religion? Yes and no. I do practice my religion but I think religion should be for god’s sake and not for its own. The Bible is full of examples of pious people that worship god but act immorally outside of the temple. That is a performance of religion. That is not what I want. If you practice religion truthfully, it is about justice and compassion. That’s another thing that it has in common with rock music: it’s empowering the underdog.

Do you feel like Judaism gives you more liberties than another religion would? There is no high authority like a pope in Judaism, so the religion is a bit more open to different interpretations. That’s a bold statement. I partially agree that Judaism is often against hierarchies in the way that it is about empowerment and freedom. At the same time, the religious texts are clearly based on a social hierarchy: men are more important than women for example. Having said that, I think that any religious text is an ongoing process. The Bible is not a definite guide to modern society. These texts need to be repeatedly, even constantly re-interpreted to fit into our real lives. Religion is—can be—progressive. We shouldn’t let fundamentalists convince society of the opposite. That’s why it is so important that people like me don’t walk away from it but embrace it and improve it. I understand that some people just want to reject religion all together but that’s not for me.

Do you feel welcomed when you go to the synagogue or do you feel prejudices because of your appearance? I go to a very liberal synagogue, so there is not a lot of stigma. I know that’s not true for every church or synagogue. Many Orthodox places wouldn’t want me to attend their services, at least not dressed the way I tend to dress. There is a lot of shaming going on in some places because of how people look or behave. But where I go, embarrassing or shaming fellow believers is a sin, it’s almost as bad as murder.

“The Bible is not a finished guide to life”

You describe your music as a healing process for the downtrodden that do not believe in traditional gender categories. Religion very often propagates and cements the latter. How do your fans react to your religious beliefs? I see what you mean but at the same time, it’s not like every religious institution is the same or oppressive. There are gay churches that are there to welcome gender-fluid people. Sometimes people criticize me for being religious and being a champion for gender freedom at the same time. They show me religious texts that are homophobic or misogynic and ask: “How can you support this?” A lot of text passages are deeply disturbing but the majority of religious people don’t take them literally. I mean we don’t slaughter lambs every day for instance. Jewish texts are always read with the understanding that it they are meant to be expanded upon and continually adapted, keeping our principles and moral intuitions intact above all else. The Bible is not a finished guide to life, ancient or modern. It was always missing details and intended to be interpreted. The same goes for the U.S. Constitution. It is the foundation of our political system and lays down a set of rules — many of which are incomplete, completely outdated or morally wrong. But we try to keep it updated and make it better.

Is there a religious narrative or part of mythology that is especially sacred to you? I like King David’s psalms a lot. As a songwriter you have to look up to him. I like Psalm 34 in particular. He wrote it when he was being persecuted by the king at the time and he pretended to be insane so that they would not kill him. He pretended to be crazy to escape a dangerous reality — that’s something I can relate to.

Ezra Furman’s latest release is called “Big Fugitive Life”. He is currently working on a book about Lou Reed’s album “Transformer” for the 33 1/3 book series. Check out his website at ezrafurman.com.

Up next Myth The word myth is worth examining. According to the dictionary, it stands for a traditional story, for a widely-held (but usually false) belief, or Shame The German language, never shy of eclectic terminologies, has a word for a specific kind of shame: Fremdschämen. Roughly translated, it means
Latest posts Telephone Angel Kenneth Goldsmith on the end of the Internet Street View’s Strange Solitude Shame "Of course I want to turn away from sin" Myth Trash “Nature is probably best for solitude” "Isolation isn''t the biggest problem" Margin Walker Party of One Alone among each other "We are surrounded by the lonely all the time" Solitude Walled Garden "A line can turn into a horrifyingly rigid reality." "Mainstream porn is quite insane" The Crossing borders “What the fuck is that doing here?” Loud as Hell A Friend of the Devil “People say: ‘Father, I need an exorcism.’” “We are rational people” The Devil You Know Inertia Hitler! War! Destruction! The Devil “We don’t have any positive pictures of adulthood” Young at Heart 'The Animal Cracker Plot'