What if you could talk to the dead? 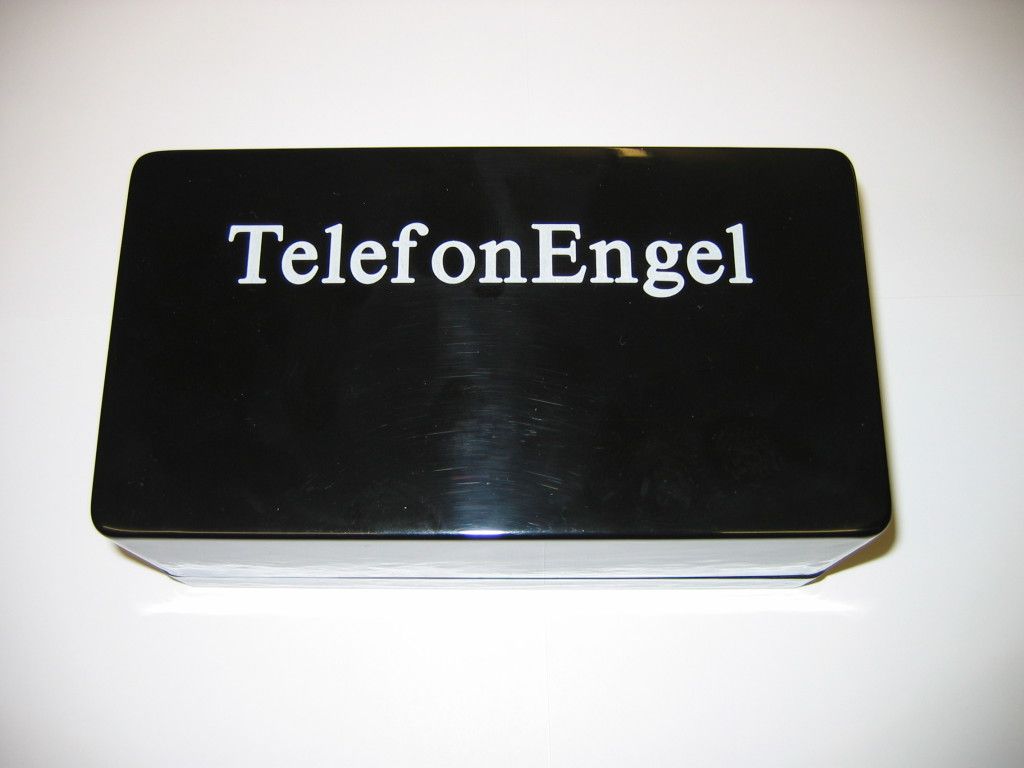 Consider the box. Slick black, a shoebox-sized container made from waterproof polyurethane. It is tastefully minimalistic. And it has the word “TelefonEngel” written across it in reassuring white letters.

The box contains a mobile phone. No contemporary one, but one of those trusty old Nokias from before the advent of the smartphone. This is an invention from 2005, after all, and phones back then were unobtrusive little devices with small screens and ever smaller keys. Devices with a standby time of up to a week. How futuristic that sounds today.

The phone in the box has been modified. Its standby time is a year, thanks to a much larger battery. Hence the size of the box. And it has been set to automatically accept incoming calls. All that makes the phone in the box a modern-day grieving assistant: Meant to be buried alongside of a loved one, it allows you to literally call them up and talk to them in the grave. Or rather talk at them, since they are unlikely to respond. The “Telephone Angel”, as its name translates from German, is a simple idea meant to ease the burden of grief.

Why, then, does it feel so wrong? 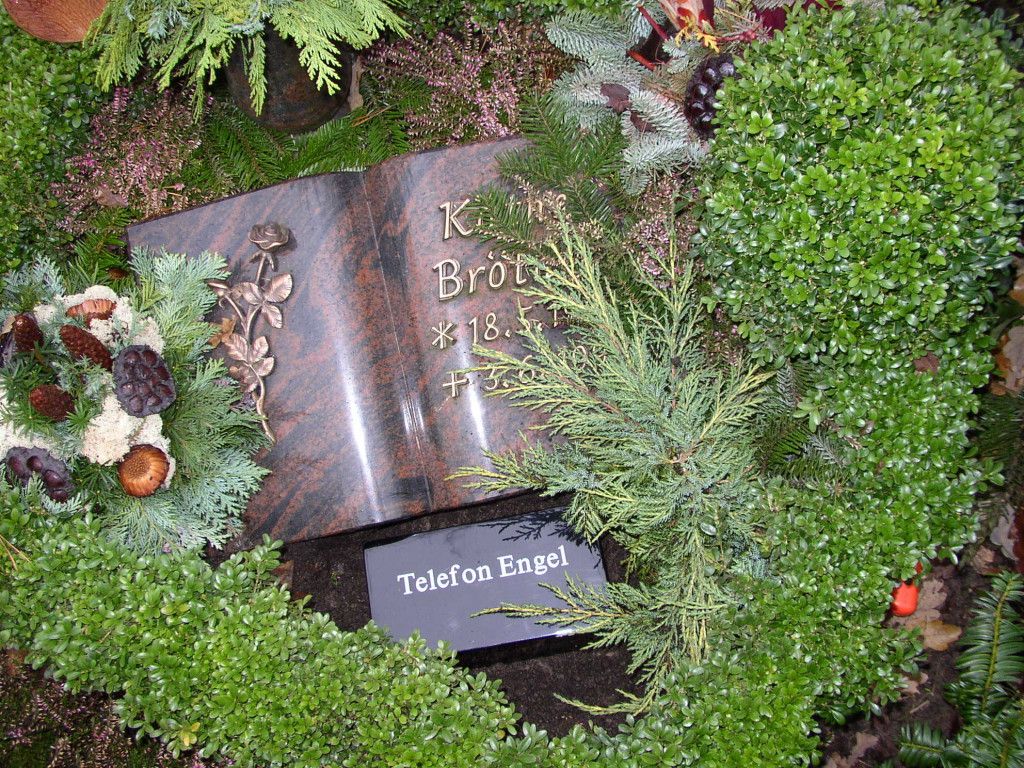 The phone in the box was conceived by a German engineer called Jürgen Bröther, who created it after having suffered the loss of his mother. In a press report following the product launch, he said that there had been so much he had still wanted to tell her. The “Telephone Angel” was his attempt to fix that dilemma for others by injecting some technology into a field in which it is conspicuously absent.

“People who are sick, have little time, or live too far away to visit their loved ones’ graves, can now call them up”, Bröther told the magazine “Stern“ back in 2005. And while I could not track him down for a conversation, let’s just consider the implications of his invention, which cost 1500€ and reportedly sold a handful of times — meaning that a number of burial sites across Germany briefly contained slick black boxes with rigged Nokia phones that served as a hotline between the living and the dead.

For technophiles, a frustrating aspect of life is that despite all human advancements, the overall paradigms of existence have remained unchanged. People are born, they age, they die. Some sooner than others, some tragically, some after a long, fulfilling life. And while we might have become better at curing diseases and preventing accidents, it has proven hard to significantly extend life, or “disrupt death” with technology. In other words: We may have gained fancy phones, but still experience the same suffocating feelings of grief and loss that our ancestors have for thousands of years.

Earlier this year, “The California Sunday Magazine“ published a fascinating article by Jon Mooallem about the famous design think tank Ideo and its attempt to “redesign death”. The quest wasn’t about abolishing death but about making the experience itself less unpleasant. An audacious task, for sure, but also one that makes a lot of sense: After all, the experience of dying, one of those aforementioned paradigms of existence, has remained virtually unchanged in the past 200,000 years.

In the article, Mooallem writes about a conversation with Ideo inventor Paul Bennett:

The entire scaffolding our culture has built around death, purportedly to make it more bearable, suddenly felt unimaginative and desperately out of date. “All those things matter tremendously,” Bennett told me, “and they’re design opportunities.” With just a little attention, it seemed — a few metaphorical mirrors affixed to our gurneys at just the right angle — he might be able to refract some of the horror and hopelessness of death into more transcendent feelings of awe and wonder and beauty.

Although I am less optimistic about the “beauty” part of that statement, I want to be bullish on the idea of making dying less depressing through ideas and technology. It is a nut Ideo has been unable to crack, and the Telephone Angel never became a commercial success either. That doubtlessly has to do with the feelings it invokes. In the article about “Redesigning Death”, Ideo’s designers remark that death feels very analogue — and I can’t help but think that the phone in the box is the polar opposite of analogue. It feels not just digital, but as though technology has gone a step too far, as though it has penetrated a sector it shouldn’t.

Feeling unease about change is nothing new, but it appears to have a special quality when death is concerned. The Telephone Angel has stuck with me for ten years precisely because it exposes the feelings we attach to death and the moral boundaries surrounding it. More recent examples like the app that keeps tweeting after a user has died prove that these boundaries are hard to see – until something crosses them.

No matter how noble the intentions, any equation containing technology and death seems to come with a significant unknown: Us. When feelings are concerned, the true black box is our mind.

Many thanks to the Museum für Kommunikation in Bern for letting us use its photos of the TelefonEngel for this article. 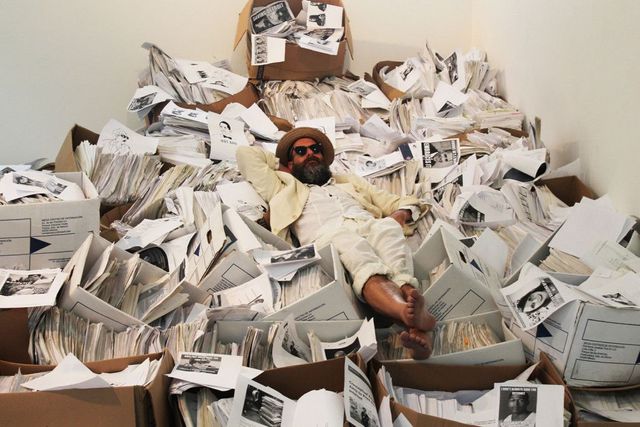 Kenneth Goldsmith on the end of the Internet
Latest posts Telephone Angel Kenneth Goldsmith on the end of the Internet Street View’s Strange Solitude Shame "Of course I want to turn away from sin" Myth Trash "The West has always had a discomfort with colors” "Psychedelics offer us life in high-definition" “Nature is probably best for solitude” "Isolation isn''t the biggest problem" Margin Walker Party of One Alone among each other "We are surrounded by the lonely all the time" Solitude Walled Garden "A line can turn into a horrifyingly rigid reality." "Mainstream porn is quite insane" The Crossing borders “What the fuck is that doing here?” Loud as Hell A Friend of the Devil “People say: ‘Father, I need an exorcism.’” “We are rational people” The Devil You Know Inertia Hitler! War! Destruction! The Devil “We don’t have any positive pictures of adulthood”